Therapy: Expectation vs Reality – A Graph

Categories About Therapy, Other 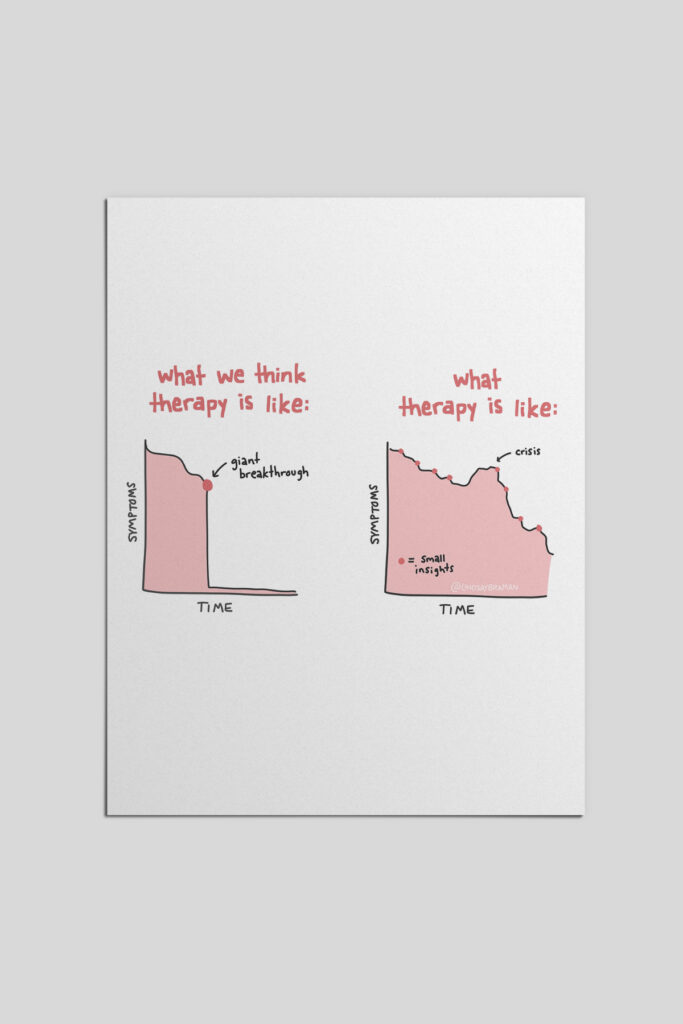 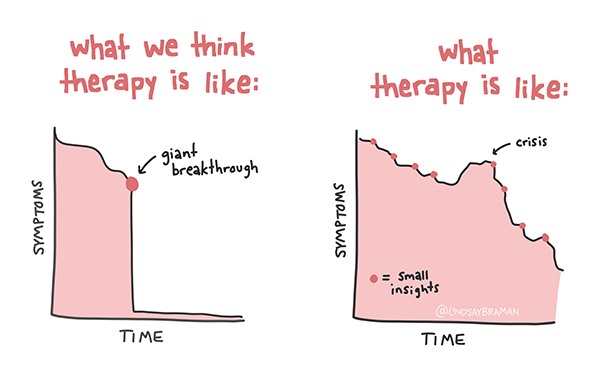 Even if you’ve never been to therapy or studied psychology, you’ve probably heard of “breakthroughs” in therapy. It’s a word that Hollywood loves – but doesn’t really exist in real life.

In media depictions of psychotherapy – where therapy is often used as a gimmick to advance a plot rather than a realistic representation – a breakthrough is shown as a big “ah-ha!” moment of realization that, once experienced, forever changes a person’s life moving forward.

Real change happens a bit at a time, however. (For most people starting therapy, according to some research, it takes around 6 months after beginning therapy to experience change). There may be a few significant “lightbulb moments,” but more often – therapy looks like lots of little “oh’s” of small realizations, that are each  markers of tiny shifts in thinking that add up big time over months and years.

And it’s not just realizations that change us – It’s what we do with them.

Our beliefs inform how we move in the world, so when our beliefs shift – even just a little – it takes some time for that to trickle down into our behavior, and even more time for our significant relationships to adapt around that change.

Therapy is all about the long game: improvements in the short term are possible and reasonable to hope for, but a good attitude to bring to therapy is to focus on the long term goal. Think of it as a compass: changing your trajectory by just a degree or two can, over time and distance, take you to a completely different destination. 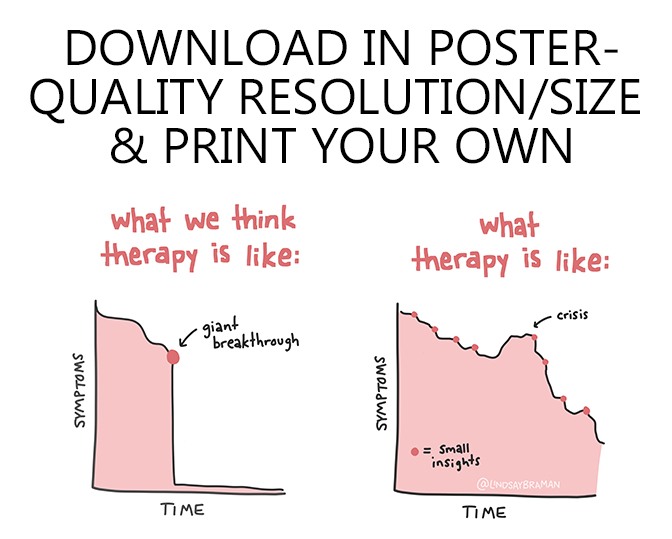 Or get All-Access as a $5/mo Patron
Image description for screen readers:
The main image in this post depicts the expectation and reality of therapy, as shown through graphs.

The first graph is titled “What we think therapy is like.” It is labeled “symptoms” on the y-axis and “time” on the x-axis. The graph shows a line very high on the y-axis slowly declining across the x-axis until it hits a point labeled “giant breakthrough.” After this point, the line drops drastically, showing the the breakthrough reduces symptoms automatically.

The second graph is titled “What therapy is like.” It is labeled “symptoms” on the y-axis and “time” on the x-axis. The graph shows a line starting high on the y-axis that slowly declines across the x-axis with a peak halfway across that is labeled “crisis.” Along the line on the graph are little points labeled “small insights.” This shows that therapy is made up of small insights over a long period of time that gradually reduce symptoms.