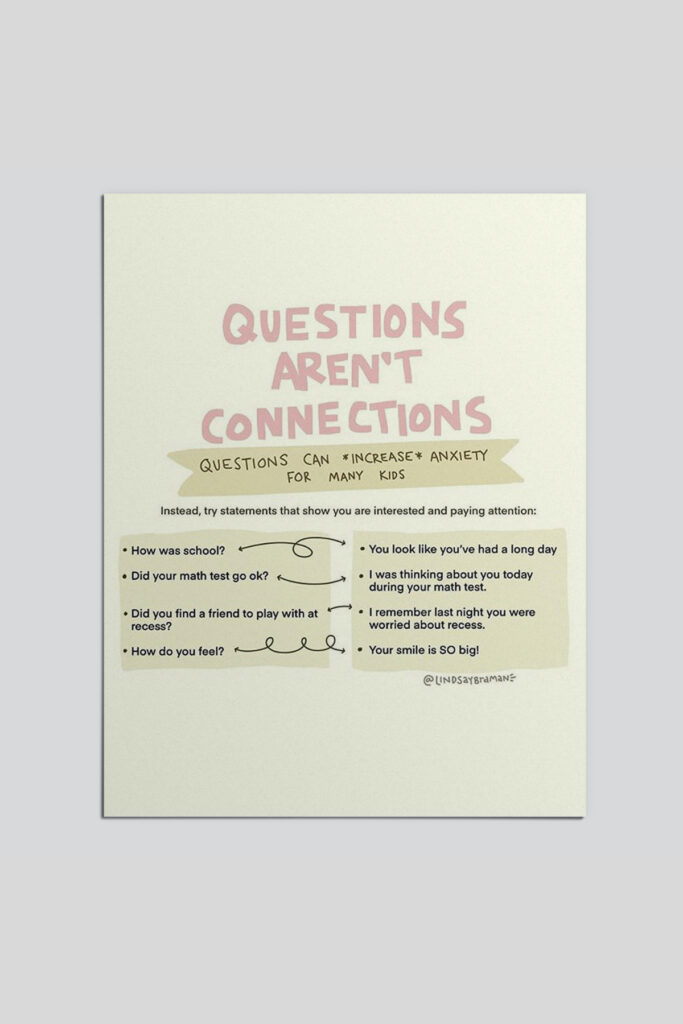 It’s normal for parents to worry about kids as they navigate shared spaces, learning, and the social aspects of growing up. Parents typically find that information can- temporarily, at least- soothe some of their worry. The temptation, then, is to have LOTS of questions for kids at the end of the day, but for kids, soothing comes when an adult can join them in a space without expectations to report, perform, or explain.

A simple shift from Q & A to observing and responding to a child’s nonverbal communication can help both kids and adults relax, and create an atmosphere in which kids who are verbal processers can share more.

Next time you are toy-shopping for sons, daughters, grandkids, or nieces/nephews remember to make space for toys that allow unscripted play.

Lots of toys come with an implicit script- that is, a way the toy is “supposed” to be played with: it might be a role the child automatically plays when playing with the toy (like most character-branded toys) or a generic script that’s followed during play (like sports, craft kits, board games, and video games). Unscripted play includes toys like unbranded dress-up clothing, play houses/kitchens/stores, blocks and building sets without build instructions, etc. Unscripted play allows kids to communicate in the language they know, and if you listen and join, you can speak it too.

Support for Parents
Parenting can be overwhelming and it isn’t something you have to do alone. If the idea of reducing the number of questions you ask your child feels really anxiety-provoking, consider giving yourself the gift of a check-in with a therapist or parenting coach. Recent research done by Yale University suggests that a short course of meetings between a parent and a therapist can soothe parents and, by extension, reduce anxiety and anxious behaviors in children.

Anxiety about what is unknown can make us want to ask lots of questions- and all those questions can put a lot of pressure on a child to relieve *our* anxiety. Sometimes the best way to connect is to scrap the questions and to bring a topic up gently (“I was thinking about you during your recess today.”), Express empathy (“I know some days that’s hard.”), and require nothing.

Text of this image reads:

/ Number one / when then’s / scrap “if then” consequences for “when then,” privileges for example, “if you don’t stop” versus “when you stop…” Number two / stop asking questions / when you don’t require an answer, words are more likely. Example “I was thinking about you today during your test” Number three / you have 30 seconds / is normal for attention to shift. Don’t try to force adult-style talks. Number four / empathy / reflect compassionately. Example “I know that was really hard” Number five / play / enjoy each other without distraction. Both children and adults experience play is intimacy. A child feels connected via play.

While this image was received well on my Instagram account, some of the feedback indicated a concern with projection or manipulation/baiting. I’m always interested in generative criticism of my work, so this was an interesting conversation to engage in. Perhaps the language in the image could be softer, less precise, and more inclusive. On the other hand, the heart of the content of the image is that taking the risk to speak (and trusting that it will either fall in a way that connects or be rejected in a way that initiates meaningful communication) to name what we intuit about the people we care about is worth it. For now, the image remains unedited, but I’ll see where I land after digesting the feedback.

Obviously, if a parent’s intent is to bait their child with feedback contrived to elicit a response the parent needs, there’s a bigger problem at play than the performance anxiety that often causes kids to shut down in response to questions. While some commenters suggested not naming anything out of a concern about being wrong or hurting a child’s feelings, I believe this is far riskier. Why? Research in Interpersonal Neurobiology (the study of how brains communicate, change, and develop in the context of relationships) makes it clear that kids need parents’ help to label emotions in order to develop the regions of the brain responsible for emotional regulation.
When we read a child’s non-verbal communication well, pay attention to what they are communicating without words, and reflect that back to them in a way that helps them feel like someone really sees and gets them- what Dr. Dan Siegel calls “feeling felt”- we are doing some of the most important emotional work of parenting: Beginning in early infancy, a parent’s naming and mirroring of their child’s non-verbal communication (through the parent’s own face, body, and words) is a primary way that humans develop the capacity to name, express, and regulate emotions.