How We Fight, Flight, Freeze and Fawn in Difficult Conversations: Adapting A Learning Mindset

When our sense of self depends on being “right,” challenging information from opposing viewpoints is often seen as a threat. Instead of being able to listen and respond thoughtfully, we automatically react. I think these reactions can be categorized into the same categories used when neurobiologists talk about how humans respond to more visceral threats (like 🐻 and 🧛🏼!): fight, flight, freeze, and fawn. 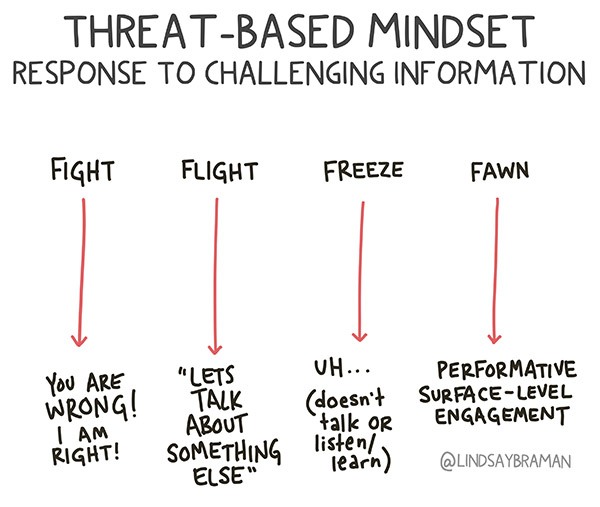 A learning mindset or “growth mindset” seeks opportunities to learn and grow, and it values in self and others the capacity to learn, reflect, respond thoughtfully, and change one’s mind when new information shifts old beliefs. 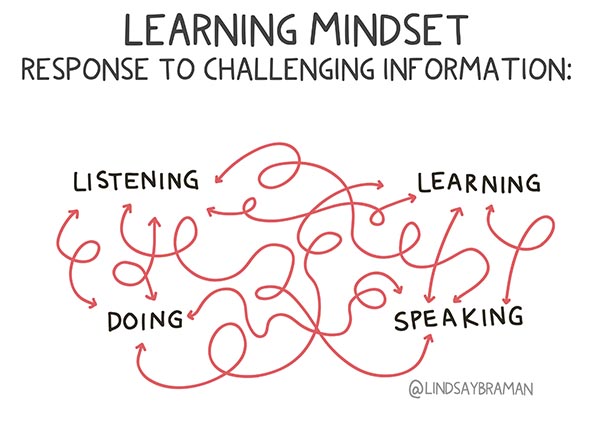 I’ve seen the whole gamut of these reactions in the comment sections of my posts on white fragility and antiracism in the past two weeks (and if I’m honest, I’ve felt most of these responses pop up and need worked within myself from time to time as we press forward into this important, difficult work).

But let me say this: If you are white and conversations about white privilege elicit a threat-response, that’s evidence that something we value is being threatened – and that something is implicit, internalized white supremacy. My challenge to myself and others is this: Can we go full circle and, when threat-based responses rise, apply a learning mindset to listen to what the feeling is actually telling us about our world and ourselves? 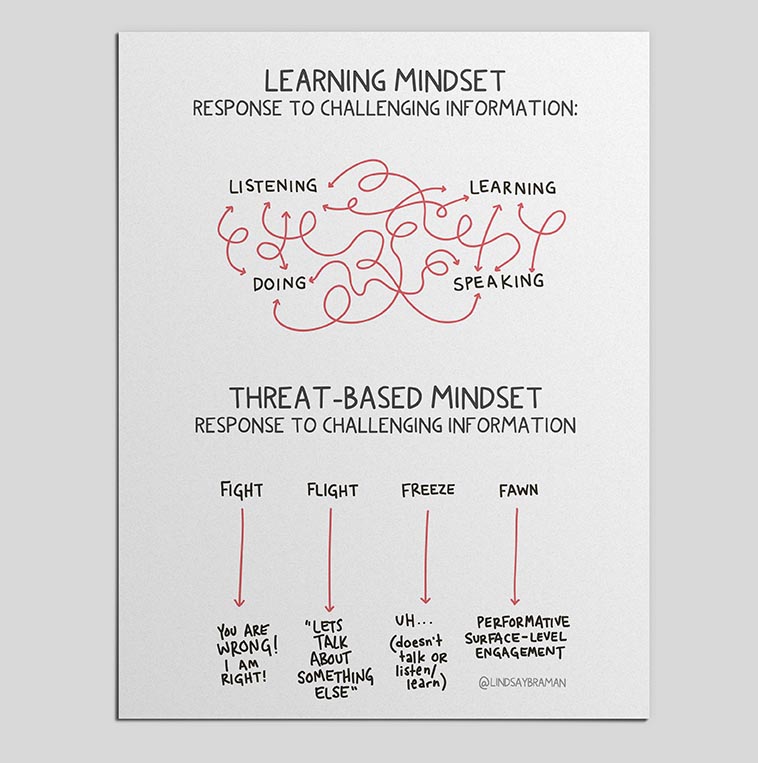 Or get All-Access as a $5/mo Patron
or grab a mug via Society6:

Whare are these categories of fight, flight, freeze, and fawn?

Our understanding of the fight or flight response continues to expand as researchers learn more about the vagus nerve that runs through our body and controls these responses. The fight or flight response has been documented in both animals and humans for over 100 years. Initially, researchers noticed that living organisms, when confronted with a life-threatening threat, would default to either fighting back or running away.

As our understanding has developed, both biologists and human brain researchers documented a “freeze” response. In animals, the freeze response can be seen in many species. If you’ve ever seen a nature video in which a lion turns to defend its limp, freshly killed dinner, and that animal jumps up and flees while the lion is distracted, that’s an example of the “freeze” response. In humans, the freeze response might look like being frozen and unable to move when a mugger demands valuables or locking up completely during a sexual assault. Read a research study exploring the freeze response for more information.

The most recent addition to these categories is the “fawn” response. Fairly “new” in the literature, it came to be added as researchers studying trauma and fear, found that some people (often, individuals who’ve experienced previous victimization) automatically react with docile, obedient behavior.

Can we get rid of our fear-based response?

Fear, and the ways we respond to it, happen on a level beyond our consciousness. The neurons and nerves signaling us to fight, run, freeze, or fawn fire exponentially faster than our conscious thoughts move. That doesn’t mean we’re destined to stay with that response though.

The ways we learned to respond to threat will probably always be our knee-jerk reaction – and I think that’s not a bad thing. In so many contacts, it’s there to keep us safe. We don’t “need” that fear response when we are working through complex interpersonal and cultural issues, but it has a role to play in our life. Growth is developing the capacity to check in with ourselves when we notice our reaction taking one of these paths, self-soothe in healthy ways to help our brain know that we are safe, get curious about what we are experiencing, and coach ourselves over into a learning mindset.

Is decision paralysis a type of “freeze” response?

Possibly, but not necessarily. Everyone makes decisions a little differently and having a different decision-making process likely is not a problem unless it’s causing distress or interpersonal problems. Neurodiverse folks, in particular, may make decisions a little differently or need more resources to decide. Culturally, we want to jump to decisions quickly, but there are those among us who make decisions more slowly, deliberately, and only after reviewing more information – and I, for one, often find myself grateful for the wisdom they arrive at.

How do we make it safe to shift to a learning mindset?

I think this is the billion dollar question? I don’t profess to have an answer to this question, that’s deep with complexity and nuance, but I can answer from my own personal experience. My journey from being insular and argumentative to being someone who can respond a bit more often with curiosity than defensiveness has leaned heavily on these resources:

#1. THERAPY. Therapy can help up build a stronger sense of self that doesn’t need to be “right” to be “ok.”

#2. RELATIONSHIPS WITH “OTHER” PEOPLE.  Friendship with people I used to consider a distant “other” invited me to question my own beliefs and assumptions.

#3. EDUCATION. For me, once there was a crack in my armor and some wiggle room, education really opened my eyes. (The book “Unclean: Meditations on Purity, Hospitality, and Mortality” was a major eye opening experience for me, as someone emerging from the mindset I’d been taught by my ultra-conservative education.)

#4. GROWTH MINDSET FOR KIDS. As a last point, and maybe the one I should have led with: I believe so firmly that kids need to be coached to have a growth mindset-not an achievement mindset – from pre-school on up – not only for social and emotional reasons, but to be prepared for a workforce that rapidly transforms and constantly requires new skills.

Pin it Now to Find it Later

Through Patreon, you can get instant access to download all printable PDFs, licensing for professional use, and early releases- all while supporting the creation of more psychoeducational resources like this. 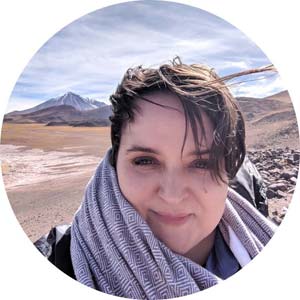