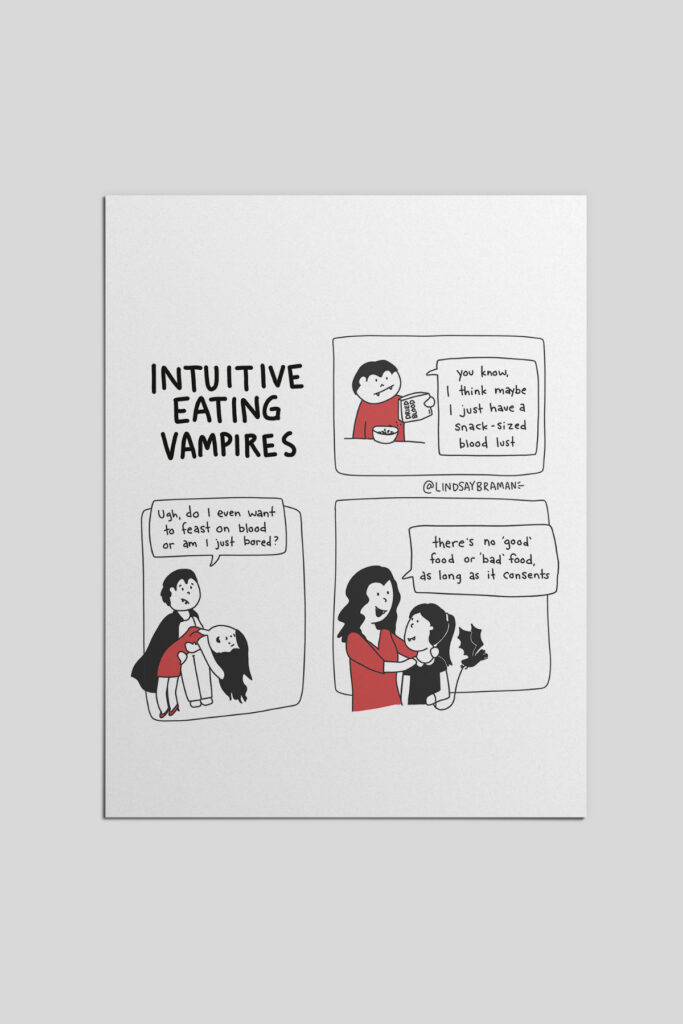 I drew these intuitive eating inspired doodles while on vacation in Translyvania (yes, I’m serious!). As I passed through this part of Romania with its kitschy vampire-themed tourism, I got to thinking about how vampires are the perfect mascots for Intuitive Eating.

One theory I would love to research one day is the parallel development of the vampire-myth and diet-culture in the 20th century.

As privileged people in western nations began increasingly to affiliate being “good” and “moral” with avoiding certain foods and maintaining certain eating rituals, did humans displace our fear of our own desire onto these monstrous creatures who, once they began eating, could never be satiated? Like humans in countless generations before us, did we create a monster that held what we feared most about ourselves?

In any case, these “monsters” are the perfect poster children for Intuitive Eating. Although they once lived in the restrict-binge cycle of disordered eating, my imagination for these anti-diet, intuitive-eating informed vampires is that they now practice permission, mindful eating, and awareness of their own body’s hunger, fullness, and satiation cues and trust their internal authority.

A habit of tuning into our internal cues when it comes to food and movement can make it much easier to tune into that system of inner knowing when we really need it (like in relationships, in getting medical care, or in situations where we need to assess our personal safety). The goal of listening is to grow the capacity to be able to mindfully feel, acknowledge, and choose how to respond to our body.

[click here to jump to a detailed description of these images]

Show off this playful take on Intuitive Eating:

Mugs, stickers, and more stuff featuring this design is available in my Society6 store.

There are three images in this post, all titled “Intuitive Eating Vampires.”

The first image is of a vampire with short hair, wearing a black cape and an uncertain expression, holding a person with long hair, who is wearing a red dress and an excited expression. There is a speech bubble coming from the vampire’s mouth saying, “Ugh, do I even want to feast on blood or am I just bored?”

The second image is of a vampire with short hair, wearing a red long sleeve shirt, sitting at a table. The vampire is pouring a box of cereal into a bowl that reads, “dried blood.” There is a speech bubble coming from the vampire saying, “You know, I think maybe I just have a snack-sized blood lust.”

The third image is of a mother and daughter vampire. The mother vampire has long hair and is wearing a red dress. She has her hands lovingly placed on the daughter’s shoulders. The daughter has black hair in a ponytail and is wearing a black shirt, while a pet bat on a string tied to her wrist is flying next to her. The mother has a speech bubble next to her that reads, “There’s no ‘good’ food or ‘bad’ food, as long as it consents.”