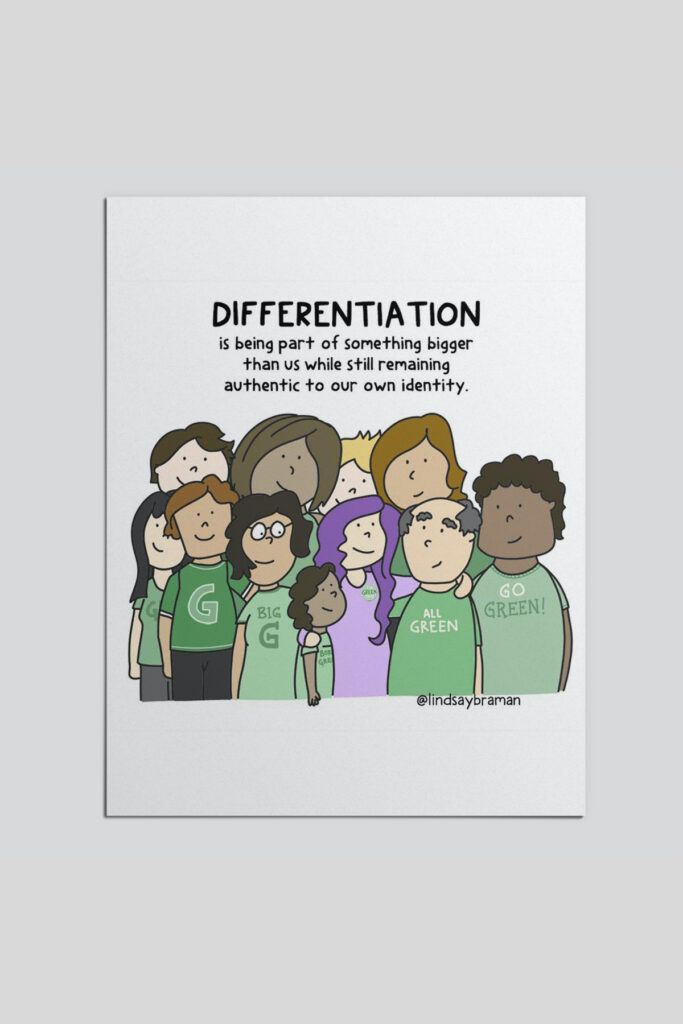 Healthy groups allow every member to express their individuality without that difference being seen by other group members as a threat. That’s differentiation.

In a psychological context, the word “differentiation” refers to how we can set boundaries between who we are and the groups, relationships, workplaces, ideologies, religions, and even self-identifiers that shape our experience in the world. It’s being part of, but also separate from someone or something.

Differentiation starts in infancy when, early in infancy, an infant’s psychology and biology are wired in a way that infants have no reason to believe their caregiver isn’t an extension of themselves. Over time, as an infant grows physically and psychologically, they begin to understand that they are separate from their mother or caregiver. Even though they remain connected to their caregiver throughout life, this early experience marks the beginning of a lifetime of differentiation between ourselves and the communities, groups, or relationships we identify as part of.

For adults, differentiation refers to our ability to join a group, believe a belief, or support a team, or even pledge “till death do us part” with our whole heart, while still retaining the unique identity that makes us, us.

For many people, differentiation is a struggle. It requires a certain strength of self to say “This is me,” and not rely on the identities given to us through our affiliations. This difficulty is why many of us struggle with retaining our own unique values or even interests when we are in an intimate relationship with someone who has different values, hobbies, or interests-  or how joining a religious, political, or social group can often seem to co-opt a person’s entire personality.

Download this Differentiation Illustration as a 1 page 8.5×11″ Poster or Handout

Being linked into something bigger than us is good: it helps us with meaning making, community, supports resilience, and (hopefully) movement towards a greater good. I tend to think of differentiation as a type of boundary.  It’s a boundary we can set for ourselves that gives us enough room to be fully, freely, and uniquely ourselves while still a part of something bigger.

In this illustration for my Instagram account, I created a drawing of a group of 11 people who all support a team named “green.” This image captures the concept of differentiation in the context of a sports team. While everyone else in the group is dressed alike in shirt supporting their team, a woman dressed in purple in the center wears a small badge that says “I’m green too.” With her button and outstretched embrace of co-green-fans, she shows her support and community while still expressing, in a physical way, the individual identity that represents internal differentiation (which is often exhibited in far less visible ways – like retaining one’s own values, beliefs, and even hobbies in the face of pressure to join with a group, trend, or relationship pressure).

11 people of various ages, races, gender identities, and body sizes stand together in a group. In the middle of the group stands a young woman with dark purple hair and a light purple dress. She is surrounded by the other 10 people who are all wearing green shirts that have messages of support for a team called “green”. The purple woman is not wearing a green shirt, but instead wears a button on her purple dress that says “I’m green too.” The woman in purple has her arm around two people in green shirts who are looking at her with a friendly expressions Everyone in the group has happy, amused, or neutral facial expressions, indicating their acceptance of one another. This image represents how healthy groups allow individuals to be individuals without needing to ostracize the individual expressing their own beliefs or personality.

Recommended reading on this topic:

As a Bookshop and an Amazon affiliate, I may earn a commission from purchases
made through the links below, this commission helps fuel my continued creative work.