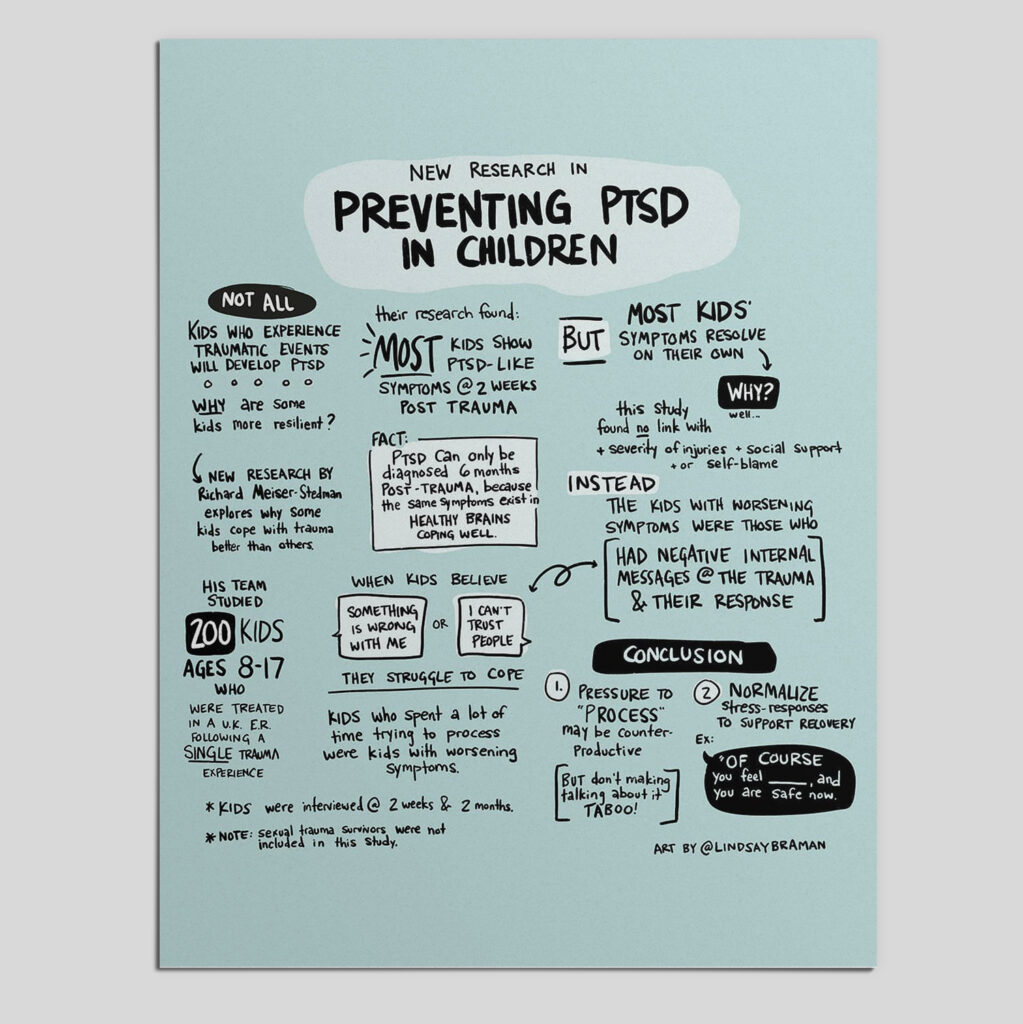 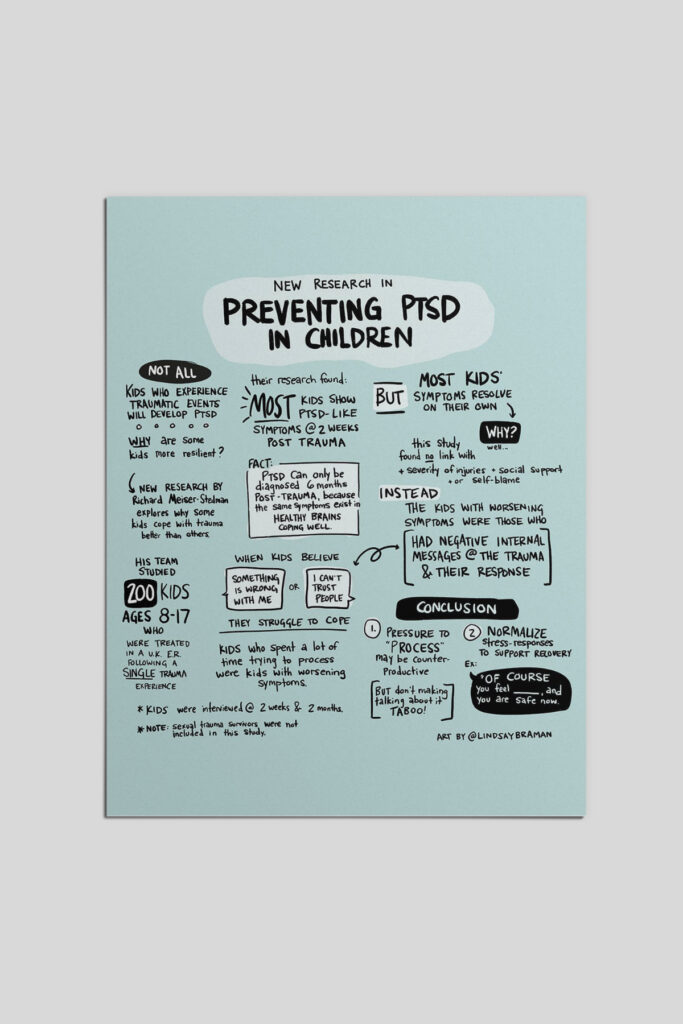 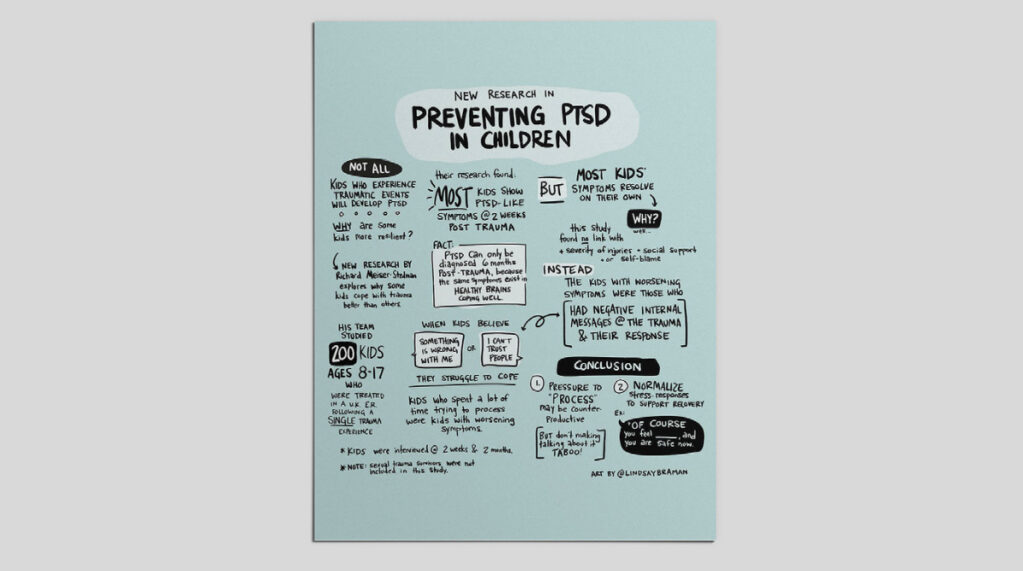 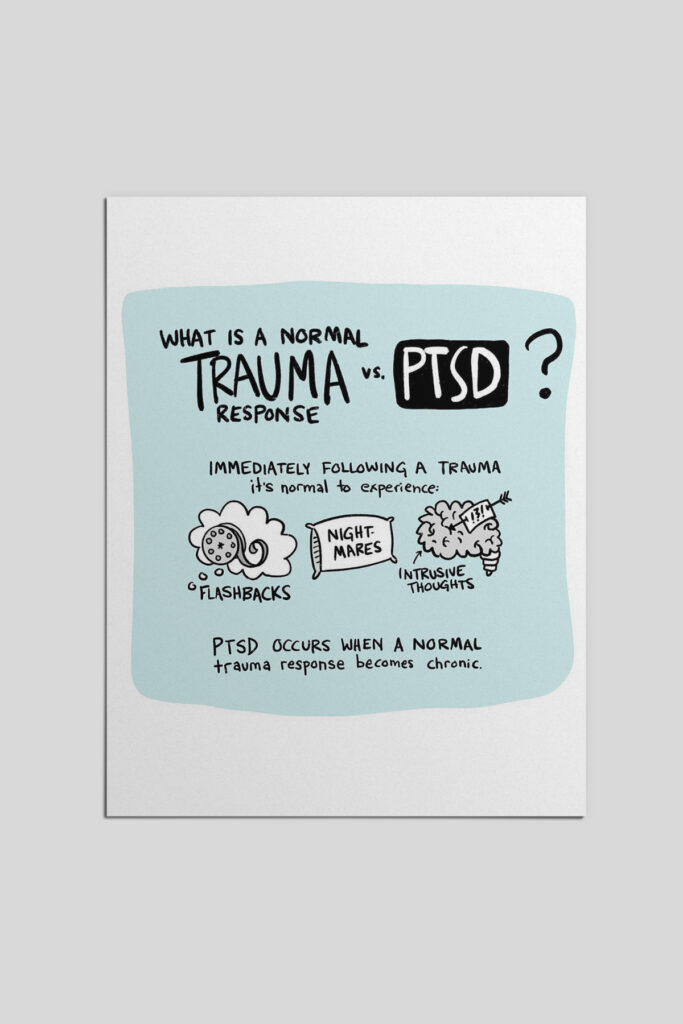 When brains experience trauma, they struggle to cope with it.

It’s normal – and part of the healing process – to have flashbacks, nightmares, or intrusive thoughts immediately following a traumatic experience. Knowing this and normalizing this matters! Recent research found that kids who believed their response to trauma was bad, wrong, or a sign something was wrong with them were more likely to develop chronic symptoms (PTSD) than kids who didn’t view their trauma response as a bad thing. 1

This sketchnote is based on a 2019 study by Meiser-Stedman & team, published in the Journal of Child Psychology and Psychiatry, 03/2019

This doodle fleshes out that research article a bit more: I think the most interesting takeaway is this: kids who spent a lot of time and brain-space trying to process their experience had a higher risk for PTSD. While this could be a chicken vs egg scenario (i.e. are naturally thoughtful kids at a higher risk for PTSD?) my takeaway from this research is the following:

1. This research indicates that we shouldn’t pressure kids to talk about their trauma in a grown-up way. (Kids and some tweens are going to work it out through their play, so we can support unscripted play to be a supportive presence.)

2. We can support kids through trauma recovery by normalizing their responses. One of the best ways? The phrase: “of course you feel ____”.

At the end of the day, the best trauma response is to help a brain process and understand the trauma it has experienced, which begins with offering normalization and a safe place for discussion.

Pin now to find it later:

The second is a doodle discussing new research in preventing PTSD in children, drawn with black and light blue on a teal background. The text reads:

Not all kids who experience traumatic events will develop PTSD.

Why are some kids more resilient? New research by Richard Meiser-Stedman explores why some kids cope better with trauma than others.

His team studied 200 kids, ages 8-17 who were treated in a UK ER following a single trauma experience.

Kids were interviewed at two weeks and 2 months. (Note: sexual trauma survivors were not included in this study).

Their research found: Most kids showed PTSD-like symptoms at two weeks post trauma. BUT most kids’ symptoms resolved on their own.

Why? Well… this study found no link with severity of injuries, social support, or self-blame. Instead, the kids with worsening symptoms were those who [had negative internal messages at the trauma and their response].

When kids believe “Something is wrong with me,” or “I can’t trust people,” they struggle to cope. Kids who spent a lot of time trying to process were kids with worsening symptoms.

Fact: PTSD can only be diagnosed 6 months post-trauma because the same symptoms exist in healthy brains coping well.

Conclusion: 1. Pressure to “process” may be counter-productive [but don’t make talking about it taboo!]. 2. Normalize stress-responses to support recovery (ex: “Of course you feel ___, and you are safe now.”).