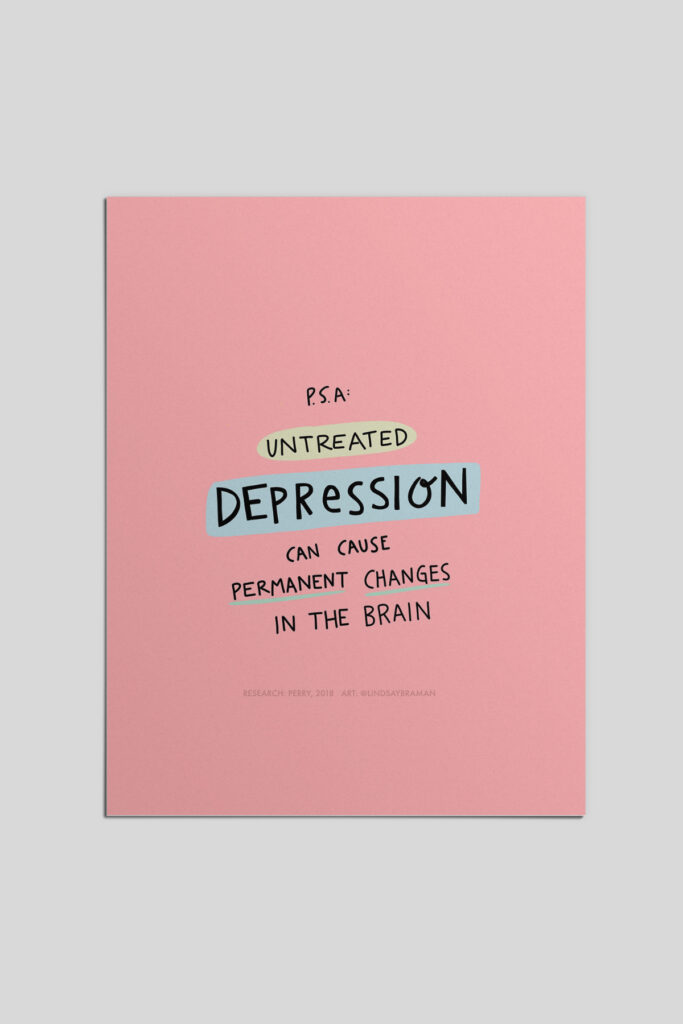 Results of a recent study confirmed what has long been suspected: when depression goes untreated, sections of the brain can begin to deteriorate, or, in the researchers’ own words “neurodegeneration underpins disease progression when major depressive disorder is left untreated.”

While many people might identify depression as a persistent feeling of sadness, it is technically classified as a mood disorder (in the official diagnostic manuals) and can manifest in a variety of ways. Depression for one person on one day might feel like an ongoing sense of sadness, while for others it can feel like a loss of interest, irritability and frustration, anxiety and agitation, or feelings of guilt and worthlessness. Depression symptoms look different depending on the person and their context.

Though all of us are familiar with feeling blue, losing interest in things we love due to stress or health issues, or struggling with self-motivation, depression is classified as a disorder when it impedes daily functioning. When symptoms interrupt life, it may be time to speak with a doctor or a therapist.

The Lancet Psychiatry Journal article that this illustration is based on indicates that untreated depression and ongoing depressive episodes can cause the brain to shrink and neural-circuits to be impaired, even in physically healthy people.

Notably, one area affected by this impairment and shrinkage is the hippocampus – the part of the brain responsible for emotional regulation and complex decision making.

Thankfully, there is growing evidence that brains are able to create new neurons throughout our lifetimes through a process called synaptogenesis, which is linked to neuroplasticity. If depression is left untreated for too long, however, degeneration may outpace our ability to generate new neurons (a capacity that reduces as we age).

The good news is that Ahidan (2011) found that brains that have been treated for and/or recovered from major depression are not significantly different in volume from non-depression-experiencing brains at an 11-year follow-up (Ahidan, 2011). While early intervention is recommended for the most effective treatment, intervention  (via psychotherapy or medication, or a combination of both) at any stage is helpful in curbing neurodegeneration and other impacts depression may have on the brain.

Because of the lingering stigma around mental health care and barriers to care (like financial expense), it can be tempting to delay treatment after noticing depression symptoms. Often, people hope their symptoms “might just get better,” and indeed, this is sometimes the case.

What this study demonstrates, though, is that seeking treatment proactively may give us the best shot at a full recovery. Effective treatment is our best shot at minimizing or even reversing depression related anatomical brain changes.

To read the medical journal article this illustration is based on, click here.

For a less-technical summary about the study,  click here.

Purchase the digital download for personal or professional use:

For more information on depression and the brain, including discussions on genetic influences and how stress plays a role, browse these studies:

Image description for screen readers:
Pink colored background with text in the center. Written at the top of the group of text is, “P.S.A.” Underneath, in a green-colored oval is written “untreated” with the word “depression” written in a blue box. Following this is more text that reads, “can cause permanent changes (the two words are underlined in blue) in the brain”