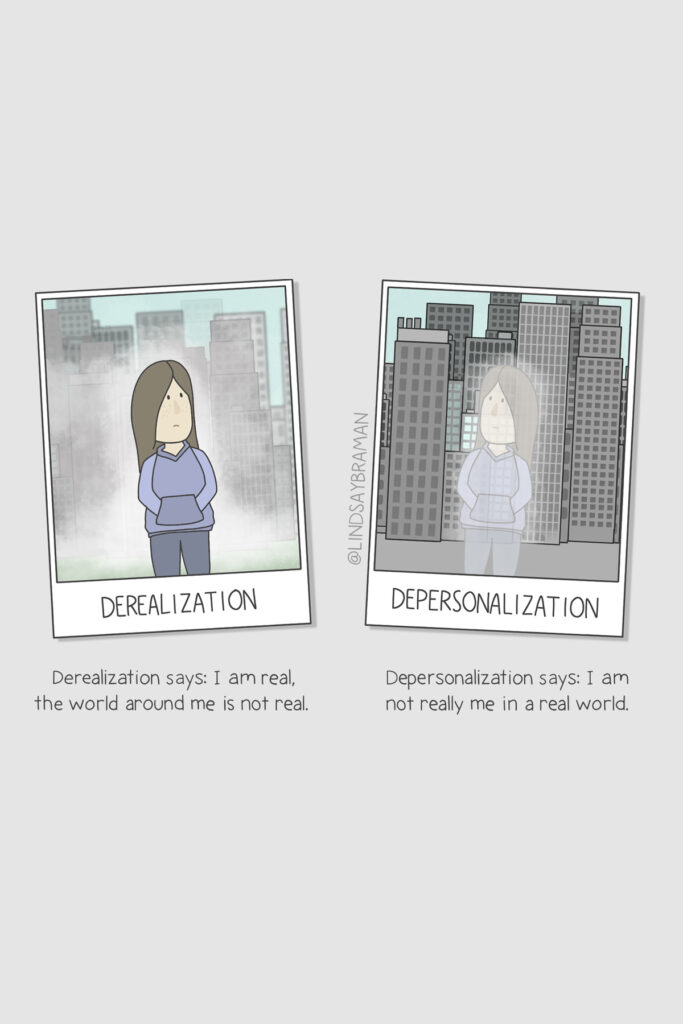 It’s normal to have occasional experiences of detachment from the world.

In periods of extreme stress, intense grief, or even physical illness, human minds often notice a feeling of separateness from the world around them.

For some people, however, depersonalization and derealization may become a primary way to relate to the world.

Generally, people describe this experience in one of two ways:

👻 as though they are a not-quite-human moving through a real world populated by real people (that’s depersonalization) or the opposite:

🙎🏽‍♀️ as though they are a real person moving through a world that isn’t quite real (that’s derealization).

Getting a Diagnosis of Depersonalization or Derealization

Depersonalization and derealization can be complex to diagnose. On the one hand, almost every healthy human brain will occasionally experience detachment or distance from reality. On the other hand, depersonalization and derealization can be a symptom of a severe mental illness (like PTSD, depression, schizophrenia, borderline personality disorder, or a dissociative disorder) or be caused by a neurological disorder (like a tumor, concussion, or migraine headache).

Sometimes, depersonalization and derealization can be side effects of medications or substances.

When the symptoms of depersonalization and derealization are serious enough to interfere with a person’s job or relationships, and the symptoms exist without any other diagnosable physical or mental illness, individuals might be diagnosed by a mental health care provider with depersonalization and derealization disorder (DPDR). DPDR is classified as a dissociative disorder in the standard diagnostic manual in the United States, the DSM-5.

Download a Digital PDF of this Depersonalization & Derealization Illustration

This PDF download set includes two 8×11 versions of the image: one on a white background and one on a grey background.

On a grey background, there are two hand-drawn polaroid pictures. The one on the left is titled “Derealization.” In the image, there is a person who is light-skinned and has long brown hair. They have grey pants on with a purple jacket, and their hands are inside a pocket on the front of the jacket. Their expression is flat, and they are standing in front of a foggy city background scene. Underneath this image is written, “Derealization says: I am real, the world around me is not real.” The polaroid on the right is titled “Depersonalization.” The same person is pictured, but they are foggy and the city background scene is clear. Underneath this image is written, “Depersonalization says: I am not really me in a real world.” Image was created by Lindsay Braman.