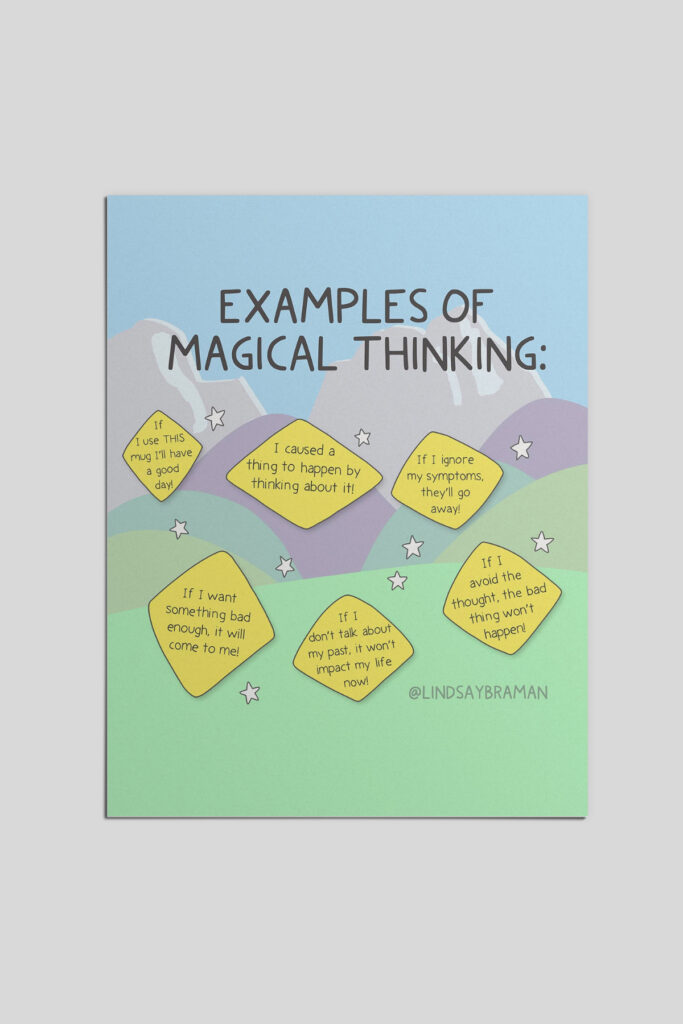 Magical thinking is a normal phase in childhood in which we think that our thoughts – or totally random, unrelated events – can change the future. Lots of us hang onto just a bit of this magical thinking as we move into adulthood and that’s not necessarily a bad thing (confession: I’m calling myself out a bit on coffee mug magic!).

As long as the thoughts are not:

then magical thinking is generally harmless.

On the flipside, thoughts structured as “Magical Thinking” can often contribute to painful or unpleasant OCD behaviors for those having the thoughts (for example, if one holds a belief that unclean hands might cause the death of a beloved pet – which could lead to a compulsive need to wash hands until the skin is chapped and bleeding).

For many of us, magical thinking is casual – we might be disappointed when our “lucky shirt” isn’t clean for our big interview, but we don’t seriously believe that wearing another shirt will mean we won’t be hired. If these thoughts become unquestioned facts, and other thought-distortions also appear, it may indicate a more serious disturbance in our ability to reality-test. In these instances, a visit to a therapist or even primary care doctor may be needed ASAP to get appropriate screening and treatment to prevent worsening of symptoms.

The mental health field can be quick to pathologize certain behaviors or thinking patterns, but if magical thinking is not causing suffering for you or to the people who love you, and the ability to reality-test is intact, there is no reason to assume magical thinking style thoughts are a “problem.”

This bundle includes a full color, full-page print of my art on Magical Thinking thought patterns plus a black and white coloring-book-style worksheet designed to help a user recognize, journal, and reality test their own patterns of magical thinking.

Image description for screen readers:
This post is centered around an image that is titled “Examples of Magical Thinking” in black all-capital text.

The image background is of stylized rolling green hills with purple mountains and grey clouds on a blue sky.

There are six yellow diamonds scattered around the bottom of the image, surrounded by little white stars. Each of the diamonds contain the following text:

Sign number one reads, “If I use this mug all have a good day!”

Sign number two reads, “I caused a thing to happen by thinking about it!”

Sign number three reads, “If I ignore my symptoms they’ll go away!”

Sign number four reads, “If I want something bad enough it will come to me!”

Sign number five reads, “If I don’t talk about my past, it won’t impact my life now!”