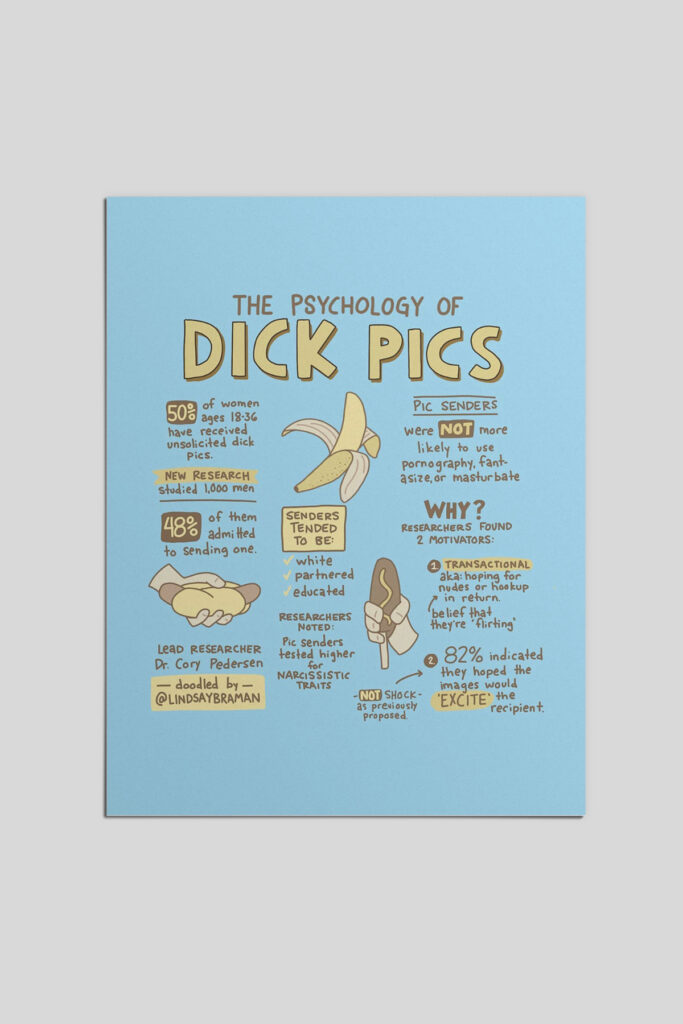 Below is sketchnote that highlights some interesting research on the psychology behind the behavior of sending unsolicited images of what is colloquially referred to as “dick pics.”

Somewhat surprisingly, this research on a group of about 1,000 men found that almost half of the men surveyed admitted to sending at least one dick pic. Most senders, in this study, of this type of unwanted-imagery believed that the behavior they were exhibiting via text was “flirting.”

82% of these senders indicated that they hoped the images would “excite” their intended recipient, and they hoped to possibly receive something in return (either a similar picture from the recipient or a physical response, like a hook-up). The researchers called this a “I’ll show you mine so you’ll show me yours” type of mindset.

This research study referenced above stated that 50% of women aged 18-36 have received exhibitionist pictures from men at some point; and most of these women reported that the image was unsolicited. In fact, many research studies around this topic reflect that many, if not most, adults (both male and female*) have received dick pics – with a high rate of those pictures being unsolicited by the recipient.

However, the variety responses of these recipients – regarding how they feel upon receiving a picture of this nature – are still being gathered through research, with recurring variations being noted among people of different sexual orientations and gender identities. Overall, all research reinforces common sense and current legislation: consent and communication are key to positive experiences in adult image exchange.

Image description for screen readers:
Sketchnote with a blue background, with yellow and brown text. The sketchnote is titled “The Psychology of Dick Picks.” There are three columns of text. The left column reads, “fifty percent of women ages eighteen to thirty-six have received unsolicited dick pics. New research (written on a yellow banner) studied one thousand men. Forty-eight percent of them admitted to sending one.” A doodle is drawn of a hand holding a brown hot dog inside a yellow bun. Underneath is written, “Lead researcher: Dr. Cory Pedersen. Doodled by Lindsay Braman (written on a yellow box).” At the top of the middle column of text is a drawing of a banana with the peel splayed open. Underneath is written in a yellow box “Senders tend to be:” with a checkmarked list that reads, “white, partnered, educated.” “Researchers noted: pic senders tested higher for narcissistic traits.” The left column of text begins, “Pic senders were not (single word highlighted in brown) more likely to use pornography, fantasize, or masturbate.” “Why [send pics]? Researchers found two motivators: 1. Transactional (single word highlighted in yellow), aka: hoping for nudes or a hookup in return – belief that they are flirting. 2. Eighty-two percent indicated they hoped the images would ‘excite’ (single word highlighted in yellow) the recipient. Not ‘shock’ as previously proposed.” Next to this block of text is a doodle of a hand gripping a corndog on a stick, with a line of mustard on it.

*To note: most research done on this topic have been within the gender binary (men and women). The field is continuing to dive deeper into all gender identities for more inclusive research findings.