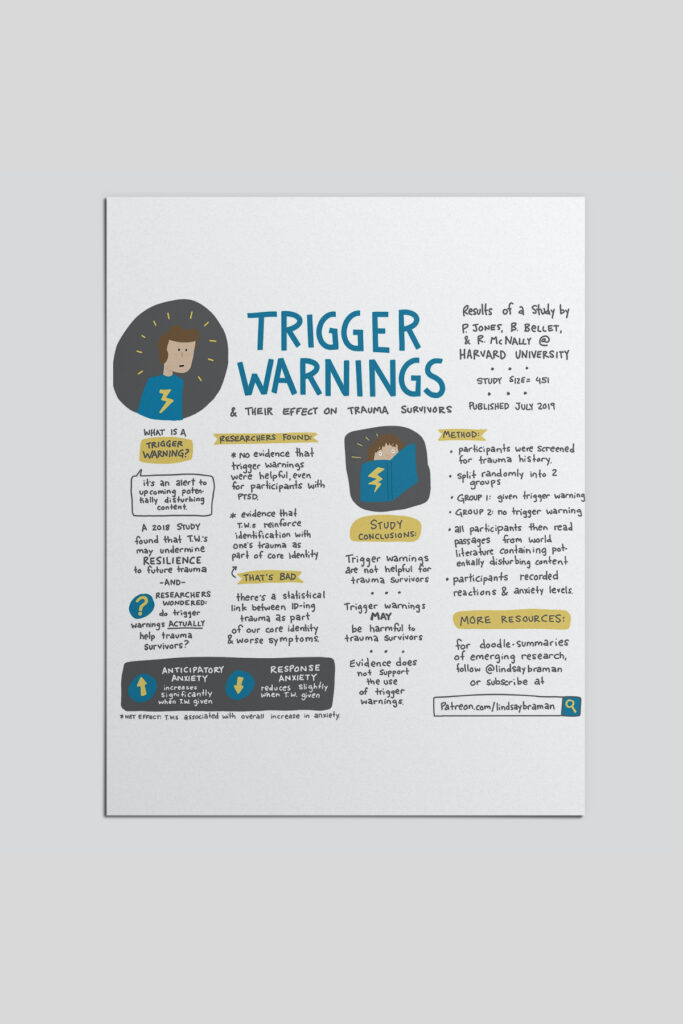 This research study presents compelling evidence that trigger warnings may do more harm than good.

While this study’s methods may overlook that a trigger warning along with the choice to opt-out has the potential for self-care (in abstaining) and empowerment (in feeling free to abstain or choose exposure), the results are notable, particularly given that they reinforce identification with one’s trauma (which is known to complicate trauma recovery) and that previous research  demonstrated that trigger warnings may decrease resiliency to future traumatic events in non-traumatized individuals.

For further research, the title of this study is  “Helping or Harming? The Effect of Trigger Warnings on Individuals with Trauma Histories“.

A Helpful Alternative to Trigger Warnings?

When we effectively communicate content, the need for trigger warnings, even among populations who might be helped, becomes unnecessary. If journalists do the work of accurate and not click-bait headlines, event coordinators communicate what their event or sub-meetings are about clearly, and educators do the work of lesson planning, accurate syllabus writing, and sticking to their schedule, then “trigger” “warnings” aren’t necessary, because that information has already been communicated in a non-pathologizing, non-trauma-reinforcing way.

Image description for screen readers:
Sketch-note title “Trigger Warnings and Their Effect on Trauma Survivors.” Text on the right side of the title reads “Results of a study by P. Jones, B. Bellet, & R. McNally @ Harvard University. Study size = 451. Published July 2019.” On the left side of the title is a grey circle. Inside the circle is a person with light skin tone and brown hair wearing a blue shirt with a yellow lightning strike on it, with yellow accent marks all around their head. Under this drawing, down the left side of the note, is written “What is a trigger warning?” The word “tigger warning” is in a yellow box. Below is a speech bubble with the text inside: “It’s an alert to upcoming potentially disturbing content.” Below is written, “A 2018 study found that T.W.’s may undermine RESILIENCE to future trauma -and- Researchers wondered: do trigger warnings actually help trauma survivors?” Next to this text is a yellow question mark drawn inside a blue circe. A column of text to the right of this begins with a yellow banner that reads, “Researchers found:” Below are two bullet points: “No evidence that trigger warnings were h helpful, even for participants with PTSD.” and, “Evidence that T.W.’s reinforce identification with one’s trauma as part of core identity.” An arrow is pointing to the last point from a yellow banner that rads, “That’s bad.” Below is written, “There’s a statistical link between ID-ing trauma as a part of our core identity and worsening symptoms.” Below the first two columns of text is a dark grey box. Inside, on the left, is a blue circle with a yellow arrow pointing up. Next to it reads, “Anticipatory anxiety increases significantly when a trigger warning is given.” Next to this, on the right, is a blue circle with a yellow arrow pointing down. Next to it reads, “Response anxiety reduces slightly when trigger warnings are given.” Below the box is written, “Net effect: trigger warnings were associated with overall increase in anxiety.” Next to the second column of text is a third that begins with an image of a person with light skin and brown hair, hiding behind a blue book with a yellow lightening strike on the front, on top of a grey circle. Below is a yellow circle with the words, “Study conclusions:” inside. Below this is written, “Trigger warnings are not helpful for trauma survivors. Trigger warnings may be harmful to trauma survivors. Evidence does not support the use of trigger warnings.” A fourth column of text, on the right side of the sketch-note, begins with a yellow banner that reads, “Method:” Below are bullet points: “Participants were screened for trauma history. Split randomly into two groups. Group 1 was given a trigger warning. Group 2 was not given a trigger warning. All participants were then read passages from world literature containing potentially disturbing content. Participants recorded reactions and anxiety levels.” Below this, in a yellow circle, is written, “More Resources:” text underneath reads, “for more doodle-summaries of emerging research, follow @LindsayBraman or subscribe at Patreon.com/lindsaybraman.” The Patreon information is written inside a doodle of a search engine bar.