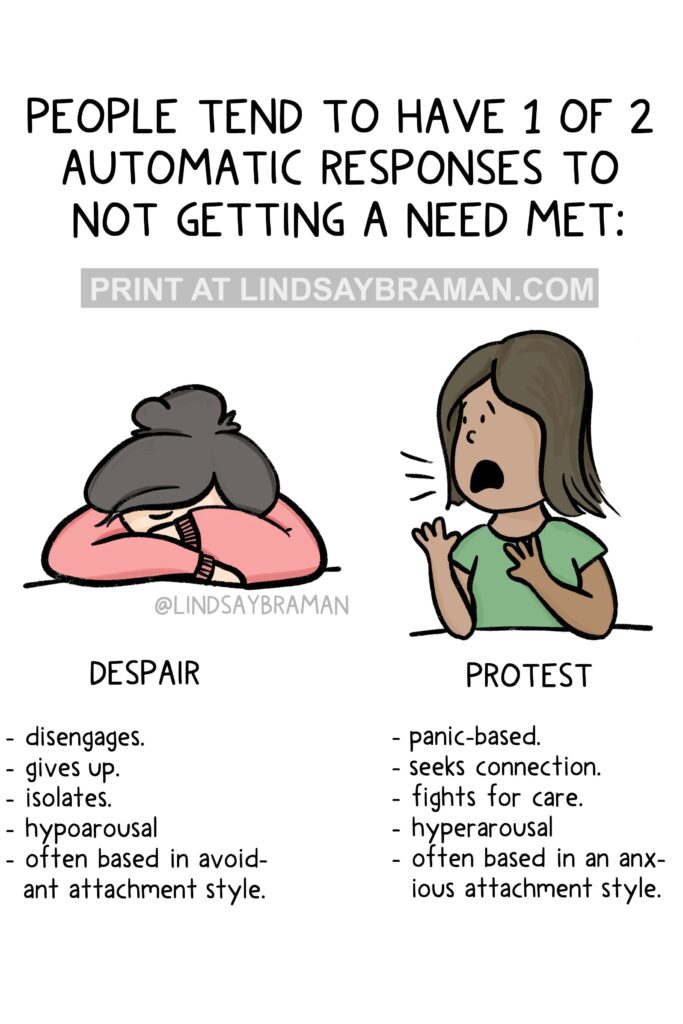 The concepts of “protest” and “despair” were first identified by psychologists James Robertson and John Bowlby in their observation of children experiencing hospitalization in the late 1940s. With restrictive visitation policies that kept parents and children apart, researchers noticed that many of these children – even after they were physically recovered and reunited with their parents – experienced significant changes in their personality. Robertson and Bowlby set out to discover why.

Robertson and Bowlby’s work included a film entitled A Two Year Old Goes to the Hospital (view via the academic source or watch a clip on youtube – note that the clip is an emotionally evocative scene of separation and may be difficult to watch). This film and the accompanying research profoundly changed the way in which care is provided to critically ill children and, eventually, shaped the visitation policies of virtually every hospital in the world.

What Bowlby and Robertson Found:

The researchers observed that when a child was separated from their primary caregiver (typically their mother) all children seemed to progress through three stages:

The initial response of virtually all children to being separated from their caregiver is protest.

Protest, for young children and infants, can show up as crying, searching for the parent, and trying to physically seek their parent. If the parent returns while the child is still in the protest phase, children can generally be soothed within a few minutes, as their nervous system is calmed by the returned parent providing comfort.

Despair kicks in when protest is ineffective. If an infant’s cries and pleas for their mother to return are not responded to, children eventually shift into a state of despair. In the despair phase, a child will appear to be “settling down,” but has actually reached the point of giving up on being reunited with their attachment figure. Children reunited with the parent after experiencing the despair phase may require more, highly attentive care after reunification in order to be fully soothed and regain trust that the parent will care for their needs in the future.

Note: According to Attachment Theory, the once-revered advice to let a child “cry themselves out” as a way to calm children isn’t actually calming- it’s an induced despair response that results in higher stress hormones, an increased allostatic load, but docile behavior.

Children who reach the denial/detachment phase will seem unimpacted by the loss of their caregiver. When reunited with their parents, they may seem ambivalent or uninterested. Children who progressed through protest and despair and who then spend a significant amount of time in the denial/detachment phase may experience lifelong relational consequences if they do not receive professional support and therapeutic parenting methods that can help repair attachment.

Protest & Despair Through The Lifecycle

Although research on protest and despair has traditionally centered on the experiences of infants and young children, humans continue to respond to crisis with protest, despair, (and detachment) throughout our lives. This is largely unresearched territory with mostly anecdotal evidence, however, a few academics have attempted to explore this concept in adult relationships.

While in infants this process always starts with protest and then progresses to despair if protest fails to get needs met, most adults have a default response that urges us to jump to either protest or despair – or what Millwood calls “demander” or “withdrawer.” Unlike infants, adults have years of experience that tells us that one method or the other does a better job of getting our needs met or protecting us from further harm, and over time that method becomes our patterned response.

Take, for example, the experience of being sentenced to a year in jail following a tragedy in which a guilty party was found at fault. Some people might file appeal after appeal, beg for leniency, and have angry or desperate outbursts, other individuals would quietly accept their sentence, serve their time, and submit without protest to incarceration. Most individuals would fall somewhere in the center, experiencing both reactions to some degree but tending more toward one than the other.

Protest and Despair in Our Family of Origins

The relational patterns in our family of origin play a huge role in the development of our adult attachment style, and in my experience, our attachment style tends to play the primary role in whether we tend to respond to being disappointed, hurt, or violated with a response of protest or despair.

Both protest – fighting back, negotiating, or advocating for ourselves – and despair – withdrawing, giving up, and isolating – are ways that we protect ourselves from disappointment.

PROTEST: For those who grew up in a family of origin where care could most easily be accessed by crying, yelling, having a tantrum, or even instigating an argument, protest will come as a more natural response to disappointment. When a partner fails to attend to their needs, notice them, or respond in the way they’d like, someone from a family in which protest was a route to connection is likely to start an argument or behave in a way that communicates to the partner that they are angry or upset.

DESPAIR: On the other hand, people who grew up in a family of origin in which arguments were avoided, tears were shamed, and big feelings were rarely soothed by a caregiver often learn by the time they are adults that protest is a waste of energy. When they feel missed, misunderstood, or even violated in a relationship, someone prone to the despair response won’t pick a fight; instead, they may emotionally withdraw, give a partner the silent treatment, or physically leave in an attempt to protect themselves.

Healing from A Protest or Despair Response

Both protest and despair are responses that protect against disappointment, and in some cases, from having to trust our partner. (For example, communicating “I need ____ from you,” rather than picking a fight that invites the intimacy of conflict requires trusting that if we share our needs that they will respond with the attentiveness we might not have gotten from attachment figures early in life.)

Part of humanness is finding ourselves in the balance between seeking and withdrawing in an attempt to stay near the people we love. Tending towards protest or despair are not, in themselves, pathology or signs that something is wrong. If you notice your tendency toward withdrawing or protesting causing problems in your relationship, there’s hope for healthier relationships through healing your attachment style.

What would it be like to try out a different way of responding? If picking fights feels like an easier way to get the care you need, what would it be like to tell your partner what it is that you need? If you withdraw from conflict out of a fear of loss, how might your relationships change if you began naming the fear, the overwhelm, and the desire for intimacy?

As usual, it’s a spectrum, not a binary, and many healthy, satisfying relationships have a pursuer and a withdrawer. If, however, you find yourself in struggling relationships because of this dynamic, consider therapy with a relational therapist. Relational therapy makes space for patterns to be enacted in the therapeutic relationship where they can be worked with in a powerfully impactful way.

This article is based largely on clinical experience and anecdotal evidence because, to date, no scholarly research has directly examined protest/despair in adult relationships. However, evidence supporting this theory can be found in Molly C. Millwood’s 1999 paper entitled “Adult attachment communication and desire for intimacy in couple relationships” which identifies adult relationship patterns of “demander” and “withdrawer” and Deborah Davis, Phillip R Shaver, & Michael L Vernon’s article “Physical, emotional, and behavioral reactions to breaking up: the roles of gender, age, emotional involvement, and attachment style” which discusses how, typically, responses to a romantic break up tend towards either exaggerated attempts to reestablish the relationship (protest) or avoidant and self-reliant coping strategies (despair).

Image describing the Protest vs. Despair response on a white background. The title of the image reads: “People tend to have 1 of 2 automatic responses to note getting a need met:”

Below the title are two hand drawn people.

On the left is a person in a pink sweater and their hair up in a bun, with their arms crossed on a table top and their head resting on their arms. Underneath this person is the word “Despair” with the descriptor words: “disengages, gives up, isolates, hypoarousal, often based in avoidant-attachment style.”

On the right is a person in a green shirt with shoulder-length brown hair, who has a concerned expression and is shouting. Underneath this person is the word “Protest”. with the. descriptor words: “panic-based, seeks connection, fights for care, hyperarousal, often based in an anxious attachment style.”

Recommended reading on this topic:

As a Bookshop and an Amazon affiliate, I may earn a commission from purchases
made through the links below, this commission helps fuel my continued creative work.