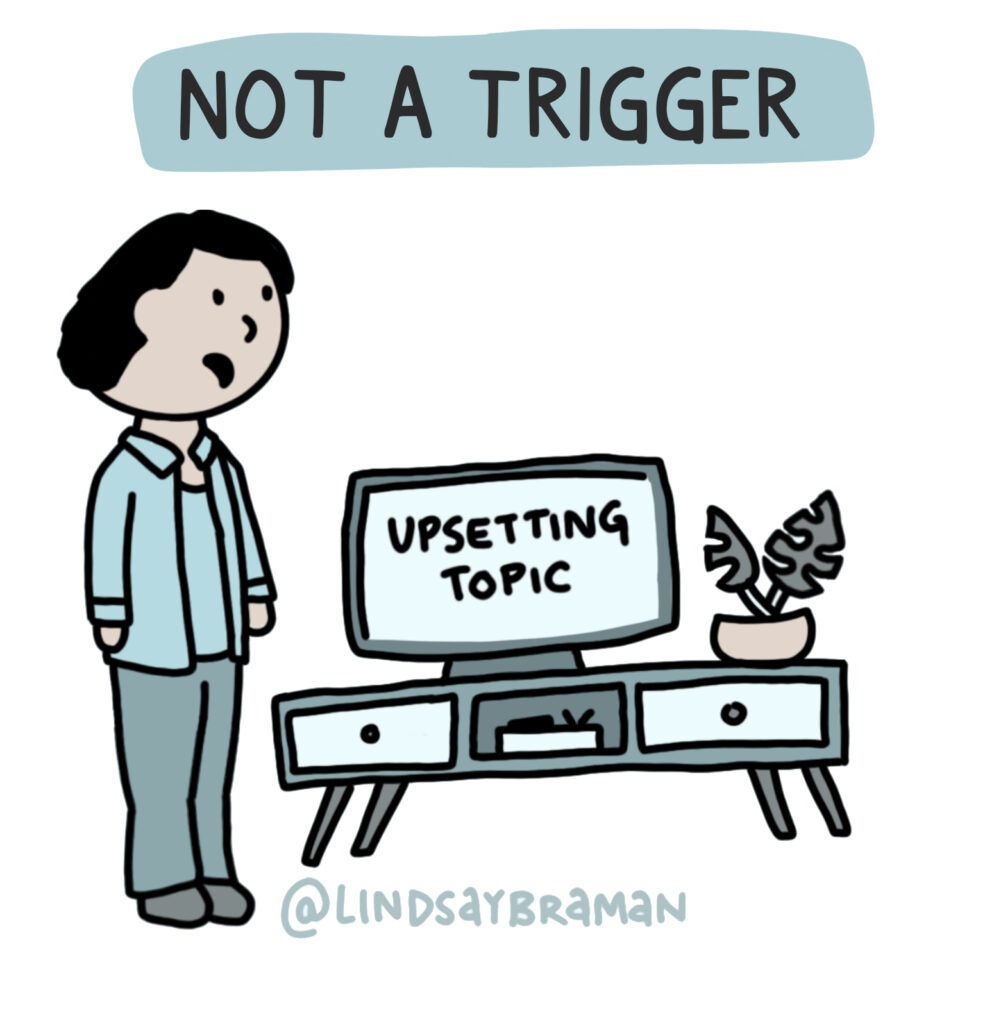 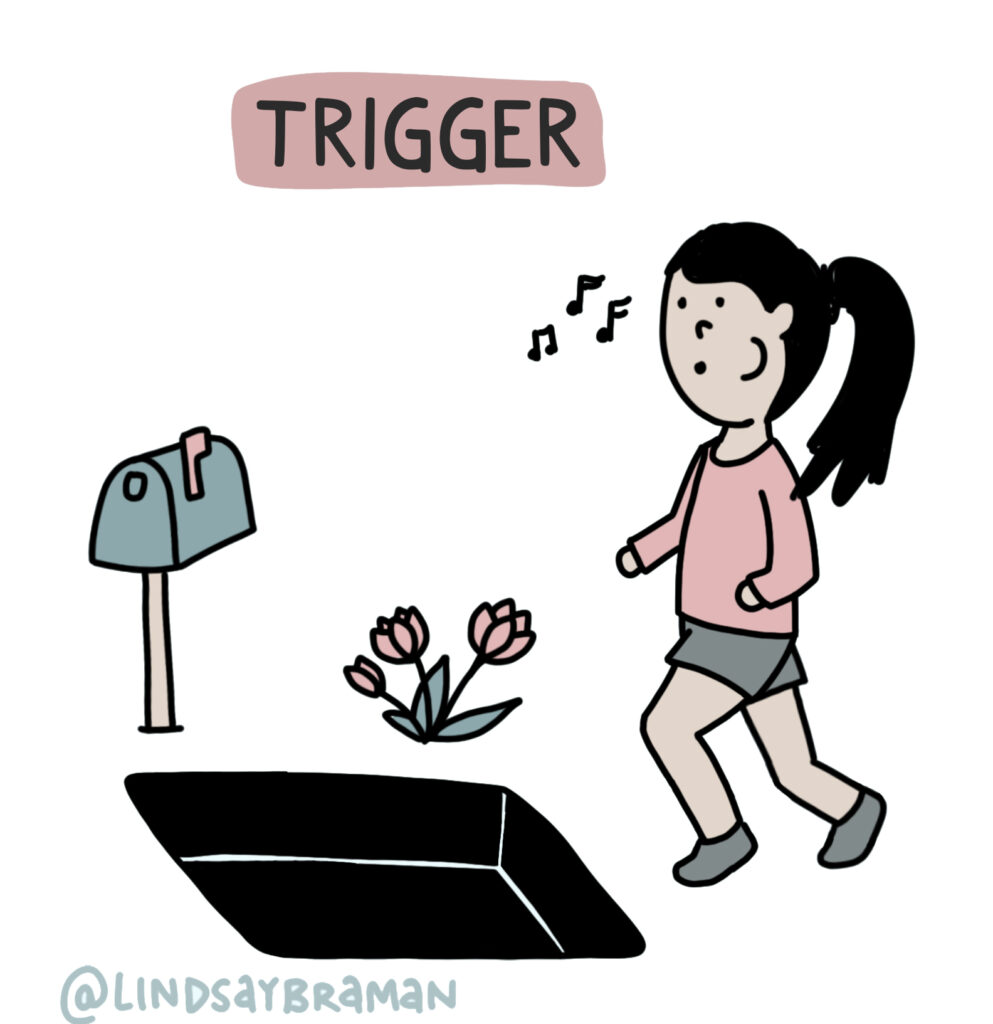 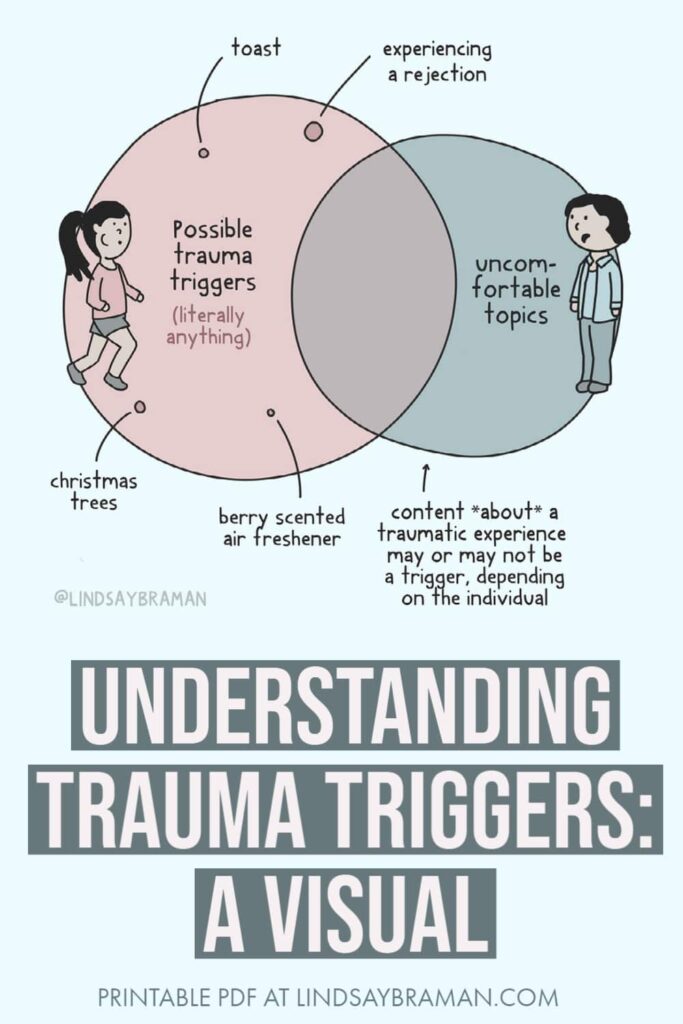 Trauma triggers aren’t getting upset about commonly-upsetting topics. Triggers can be sights, smells, a certain touch, a feeling, or sometimes- much more rarely- exposure to topical information. Trauma triggers often include a loss of a person’s sense of time, space, or “self.” When triggered, emotion is amplified OR completely muffled OR sometimes seemingly unrelated to the situation. Triggers are like a trapdoor in the brain of a trauma survivor.

A person who is triggered usually has some awareness that they are unwell but won’t recognize it as a trigger. If they are aware they are triggered, the individual is often confused about why they are triggered. The self-awareness to recognize being triggered while actively experiencing a trauma trigger and the capacity to communicate about that state is generally a skill gained through effective trauma processing. Therapy – and my educational worksheet on locating triggers – can help in identifying and processing through trauma triggers.

Collectively, we are using WAY more mental health language today than in previous generations. Combined with a cultural familiarity with the DSM-5 (the psychological diagnosis manual) that would leave Freud in fascinated horror, it shouldn’t be surprising that many individuals tend to assign pathologizing words to reactions that are actually pretty healthy. I think it’s essential to normalize getting really upset in response to things that should be really upsetting. That’s not pathology; it’s humanity.

It’s important to normalize getting really upset in response to things that should be be really upsetting. That’s not pathology, it’s humanity.

The Semantics of the Word “Trigger”

“Trigger” is a tricky word in our psych-savvy modern language. It feels familiar to most English speakers. As we’re starting to talk more about mental health culturally, it’s not surprising that it’s a word that often gets used without understanding what “trigger” actually means in a mental health context. Here’s a doodle on the difference between something that causes emotional discomfort and a trauma trigger.

Some of the confusion over how to use the word “trigger” may be related to the semantics of “trigger” (as a generic verb) vs. “Trigger” (as a specific clinical symptom). When we say, “x triggers my anxiety,” we’re not actually using the word in a mental health-specific way. Linguistically, it’s like saying, “hitting that sales goal triggered my bonus.”

Trauma Triggers are Unique to Each Individual

Not all triggers are what you’d think of as difficult topics, not all difficult topics are triggers. Triggers are intensely personal to each individual and can range from people/places/things to relationship dynamics, and just about anything else.

It’s important to note that learning to recognize triggers as we work through trauma is not so we can carefully and precisely avoid them. Instead, naming triggers as we work through trauma is about growing awareness of how we are impacted, developing skills to help soothe ourselves, and creating a game plan to find ways to return to ourselves after a trauma trigger. With time and practice, triggers can shrink from giant trapdoors in our path down to little puddles we know how to splash through.

For some trauma-survivor advocates, trigger warnings are promoted as a way to navigate difficult topics as potential triggers, but are they actually helpful? New research presents evidence that Trigger Warnings may actually have the opposite of the intended effect.

Image description for screen readers:
Image describing Triggers vs. “Triggered” on alight blue background with two columns of text. On the left, the title “Not A Trigger” is written with a blue background behind the words. Underneath is written, “It’s normal to feel upset, anxious, or extremely uncomfortable when we encounter  difficult content. Having a strong reaction is normal & learning to regulate is part of normal emotional development.” Below this text is a doodle of a person with short hair and an upset expression staring into a TV screen, sitting on a TV stand with a plant on the side of it. The TV screen says “Upsetting Topic.” On the right, the title “Trigger” is written with a pink background behind the words. Underneath is written, “Trauma triggers are different. They often include a loss of a person’s sense of time, space, &/or self. Emotion is amplified or completely muffled, or sometimes seemingly unrelated to a situation. Triggers are like a TRAP DOOR in the brain.” Below this text is a doodle of a person with long hair in a pony tail, running and whistling, with music notes above their head. They are running toward a hole in the ground, with a mailbox and a tuft of flowers.

Your Trauma Trigger vs. Uncomfortable Topic drawing really helped me understand my 24 year old daughter with Autism. She is highly intelligent but her anxiety and impulsiveness get in the way. She gets very upset when involved in an uncomfortable topic and I would call it being triggered and that would set her off even more! Now I understand why. Thank you for your insight.